According to a popular opinion on shamans in , black shamans are dangerous people for they have the power to harm or even kill others by calling down curses on them. On the other hand they are believed to have the power to neutralize other shamans’ curses and to do away with the demons that cause serious illnesses. A black and white shamaness, the one I wrote about in the previous post, in the beginning of an interview said in relation to her ‘black’ shamanic practice that she would perform various kinds of rituals except for calling down curses and anything that she might consider harmful. As she explained, Buryat shamans have to take ninety-nine oaths during their first initiation, which prevents them from causing any kind of harm:. She said; it was prohibited to endanger human life , put obstacles in people’s way and quarrel , but they have to help all the living creatures . The black shaman's costume in general is regarded as a suit of armour protecting its wearer from the possible attacks of harmful spirits. Buryat shamans, similarly to warriors, also have weapons which can be found on their costume and whip. These are miniature weapons made of iron that are belived to have been forged by Damdin Dorlig the patron deity of blacksmiths who is also regarded as the blacksmith and armourer of shamans. Based upon the idea that a shaman is an armed warrior, we can assume that in earlier times, those who were in lack of physical or mental strength and thus did not have the potential to take their share of battles and fights, found their way out of this situation by becoming warriors of an invisible realm. The members of their community believed that they were the only ones who could defeat the invisible enemies, i.e., the harmful spirits who caused diseases and misfortunes. Thus, the ’weak’ had an alternative to become a beneficial member of the society by obtaining the ability the ’strong’ could never have. In times of unceasing fightings and rivalry, there was only one possible way to be recognized by the community: namely, to become a warrior. The power of the black shaman is expressed by the number of weapons s/he has on his/her costume. Those who have been practising for many years have more elaborate costume than the beginners. The reason for this is that stronger and more experienced shamans encounter stronger spirits. It is not the spirits they invoke who can

do harm to the shaman, but the evil spirits or various kinds of demons that accompany the invoked ones, or those the shaman tries to expell from a client’s body.

A Black Shaman in his Armour 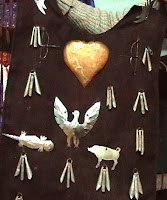 Between two miniature bows a hart shaped mirror is fastened to the costume. the tree animals stand for the tripartite world; the lizard represents the netherworld, the bird the upperworld and the hog stands for our world. 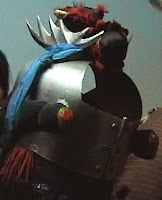 There are two antlers on each side of the helmet. The number of the prongs indicate the number of consecrations the shaman has recieved. This shaman has six prongs on each of his antlers, which means that he has twelve consecrations. The maximum number is thirteen. (He has been told by his master not to do the thirteenth)
Posted by Mátyás Balogh at 5:58 PM

Hello friends
Do not miss your chance to get a free ipad. Visit http://bit.ly/cmmVr7